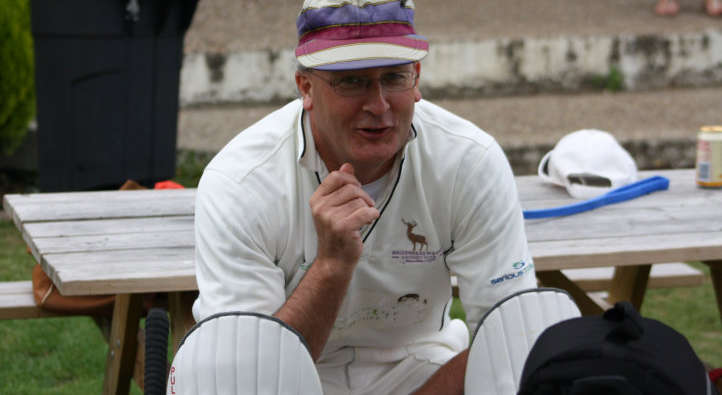 As we reach the first weekend of October it's time for the review of the Sunday season, which ended with victory on 16th September against The Stage. Fittingly another glorious sunny afternoon, which mirrored almost every game during the season.

Surprisingly compared to the 2017 season(16 games played) there were comparatively fewer games played. This was due to a run from the middle of June to the end of July. Boyne Hill cried off late on 17th June and The Fiddlers again cried off late for the first Sunday of July. The 15th was cancelled due to the World Cup final and it actually poured down on the last Sunday of July!

My thanks to Tom Wilding and Bally who filled in on captaincy duties whilst I was injured for the first two Sunday games and James Bowler, who captained against Dave Smart's X1.

Gunbarul 12 (not selected for Bowler's game)

Rich Lawrence - Good to see him back playing and making rare Sunday appearances. Against the mainly lessor Sunday bowling there was no blocking just attacking! Aggressive runner between the wickets and gun fielder. Lowest score of 34 in four innings.

Sean - Made hay whilst the sun shined! After literally a freezing start v Regals runs eventually flowed both on Sundays and in the league. Two hundreds and two fifties after starting with three low scores. Spring Bank Holiday the turning point, 50 in league, 50 on Sunday and undefeated century on Monday(first one ever). Another top fielder(in comparison to the general poor Sunday fielding), helped out with coaching and bar and social backbone of club, top bloke.

Gunbarul - As ever a reliable middle order performer, usually achieved at a high tempo.

Reaper - surprise addition courtesy of 47no in last game, highest score since 2002.

Harry Blackwell - man of the match performance with bat and ball v David Smart's X1, also breath taking catch off his own bowling.

Batsman of the Year

Krish Vaja - promising bowler, may need to straighten his arm, bowls wicked Waqar yorkers. Fred Truman once said" To be a great fast bowler you need a big heart and a big bottom"!

Gunbarul - Mr Reliable, when either opening bowling, first or last change, invariably picked up a wicket and usually economical.

Reaper - only bowled the maximum 8 overs twice. Not as economical this year, albeit tends to bowl at death.

Chris Butler - not as good as previous seasons but still did a job. Strangely went over two months between games with all the cancellations during June / July.

Swapnil Manchanda - first Sunday season for M &B. High economy rates but worked well when bowling in tandem with Chris and GT. Needs to eradicate the full toss from his repertoire.

Bowler of the Year

Obviously not as successful as last year but almost won as many games as we lost. With Sunday cricket continuing to decline, indeed at a number of large clubs there are only a handful of games, M & B has a comparatively strong fixture list. Next year fifteen Sundays fixtures are proposed with one Bank Holiday Monday game. The list will reflect the months where availability is better(free Sundays in May & June and games every Sunday in July & August apart from Bank Holiday Sunday - Lord Taverners). Three early season games(last Sunday in April and first two in May) giving players opportunity of early season practice games. Free Sundays in June giving ladies opportunity to play games on main square.

My thanks to all the players who supported me during the season, especially my regulars. To Pete for umpiring, as well as Tim, who kindly stood in the final game. To Brian for his lovely teas and for putting the tables and chairs away(you don't know how much hassle that was last year), and to Charlie for preparing the wickets and putting these reports on the website and facebook.

Winter well everyone, hope to see you at the club in the off season, otherwise the pre-season nets in March

25th September - a date for your diary, Comedy Night at the Pavilion. To book, visit https://t.co/CeTnVLKPJj https://t.co/kSQqnxbHd0

(4/5) The wing walk will take place at the Skymax base airfield in Upminster, Essex. As with any flying activity, s… https://t.co/keFnHUjl9w

(3/x) Entries close on 31st March 2022. A winner will be picked at random and contacted via the email address provi… https://t.co/CjeSnLVaWy

(2/x) To enter, register your details to be kept up to date with all of Wing Walker Rum's latest news, events and o… https://t.co/FgN0UjNS6R

A message from coach Henry! The ECB is allowing us to…

Training in the nets at the club is up and running again, at last. …

2020 Season: Letter from the Chairman

Spring is approaching us and the promise of summer…

The Cricket Club is situated in the beautiful village of Bray, Berkshire, on the banks of the Thames, overlooked by the Church of St Michael. The main ground is widely acknowledged as one of the most picturesque in the country.

Est. in 1798 and a member of the Morrant Thames Valley League, with three senior teams and a thriving colts section both boys and girls

Cook My Grub is an online marketplace which offers a refreshing new way to search and order fresh, authentic and healthy home cooked food in your local area

The experts in local and international property

Savills offers a wide range of specialist services from financial and investment advice to valuation, planning and property management.

Wicket academy have designed their coaching sessions to meet the needs, wants and demands of junior cricketers, with a specific focus on developing competence, confidence & character in a fun/safe environment.

Tutortoo offers bespoke, one-to-one and quality tutoring for your child

All tutors are handpicked, fully DBS checked and specialists in the subjects they teach. Operating in Slough, Windsor, Maidenhead and surrounding areas, and offering tuition to students of any age, in a range of subjects, Tutortoo is here to help your child.

We specialise in conserving, protecting and reinstating stone, plaster and decorative arts

Cliveden Conservation is an award-winning company and one of the country’s leading experts for the conservation of stonemasonry, terracotta, plaster, wall paintings and the decorative arts. The company operates three workshops in Berkshire, Somerset and Norfolk that are strategically positioned to provide conservation on both a practical and consultancy basis to different areas of the country.

Goyals is a schoolwear outfitters based in Maidenhead in Berkshire

Goyals is a family owned business that has been supplying school uniforms in the Berkshire and Buckinghamshire area for more than 40 years, including Maidenhead, Windsor, Slough, Burnham, Taplow and Marlow.

Raise some money for the club by making your Amazon purchases through our site.

Click on the link below and it will take you to the Amazon site where you can make your purchases. A percentage of your purchase will be provided to the club at no cost to you, its as simple as that!!

Berkshire Cricket is the governing body for ALL cricket within the County of Berkshire and one of the leading non-professional Counties in England, recently enjoying substantial success on the field with both men and women's County teams.

Material from this website may not be copied or distributed, or republished, uploaded, posted, or transmitted in any way, without the prior written consent of the owners of said content. Please get in touch with Club Admin for further details.

Under new laws coming into effect in May 2018, we need to provide you with certain details concerning how your personal data will be used and protected.

Maidenhead and Bray Cricket Club takes the protection of the data we hold about you as a member seriously and are committed to respecting your privacy. This notice is to explain how we may use personal information we collect and how we comply with the law on data protection, what your rights are.

Categories of personal data we collect

Automated decisions we may take: None

Who we will disclose your personal data to

The legal basis for the collection and processing of your personal data is for:

that it is necessary to fulfil the contract that you are going to enter into or have entered into with us for dealing with medical needs: that you have given your explicit consent or in your vital interests.in all other cases: that it is necessary for our legitimate interests which are to build a programme to encourage participation in cricket and does not prejudice or harm your rights and freedoms.

Your right to withdraw consent

Where you have given your consent to any processing of personal data, you have the right to withdraw that consent at any time. If you do, it will not affect the lawfulness of any processing for which we had consent prior to your withdrawing it.

Location of your personal data

How long we will keep your personal data for

We will not retain your personal data for longer than is reasonable and necessary for the purposes for which it was collected. We shall retain your personal data for such time as you are registered with Maidenhead and Bray Cricket Club as a member. 2 years after you cease to be a member of Maidenhead and Bray Cricket Club or play an active part in the Club, we shall delete your data.

Your rights in respect of your personal data

You have the right of access to your personal data and, in some cases, to require us to restrict, erase or rectify it or to object to our processing it, and the right of data portability.

If you have any concerns or complaints about how we are handling your data please do not hesitate to get in touch with the named person at the club. You can also contact the Information Commissioner Office.

Most web browsers allow some control of most cookies through the browser settings. To find out more about cookies, including how to see what cookies have been set and how to manage and delete them, visit www.allaboutcookies.org.

We employ security measures to protect your information from access by unauthorised persons and against unlawful processing, accidental loss, destruction and damage. We will retain your information for a reasonable period or as long as the law requires.

You are entitled to see the information held about you and you may ask us to make any necessary changes to ensure that it is accurate and kept up to date. If you wish to do this, please contact us

All comments, queries and requests relating to our use of your information are welcomed and should be addressed to Club Administrator